They were already here.

The God who carries the flag and the God who is the Sun.

The God who laughs in death’s face and the God who is death.

The Goddess, protecting all the dead in her womb, and the Goddess seated on the lotus.

The Goddess sleeping with seals at the bottom of the ocean.

The God of War, the God of Sex, and the ever-drunk God.

Fire Goddess and Mother of Mothers.

The world came out of their boredom. From their blood – constellations. They created animals, plants and humans. The latter were escorted from swampy forests and sandy plains to the first cities. They settled in temples built by people, sometimes almost reaching the sky. They thrived on being worshiped with perfumed oils, fish guts, incense, flowers and blood. Sometimes they answered prayers, helped to kill someone, or healed someone. Sometimes they were far away: unfathomable and unimaginable, and sometimes you could find them fornicating with mortal women or men. They were everywhere and everything. Gods as an action and Gods as a space. Gods as a hope and as a retribution. They held the stream of life wrapped in a cross-shaped key firmly in their hands and ruled the metropolises of the dead. They fought with each other, caused earthquakes and volcanic eruptions, fell from the sky like meteorites or took care of animals in the deep forests. Only because of them, winter changed to spring and birds returned home, fish wriggled in the nets. They were the music and the eternal silence.

And then the Gods disappeared.

The flowers and volcanoes remained.

The seals remained in the ocean.

The temples remained (architectural monuments protected by the state).

People without the help of the Gods expanded their cities, split atoms, ascended to the sky and barbecued.

In a world forsaken by the Gods, people were searching for meaning anew.

It cannot be said that the departure of the Gods left no trace.

At first, people felt abandoned and alone. Without the Gods, the world seemed more dangerous and darker, stuffier. Who to turn to in case of an illness? How to make sure that you will be able to get a loan or conceive a son with your wife? Who will take care of the passengers at sea or the dead who have gone beyond?

The most striking change occurred in the cities. Once upon a time, they spread in concentric circles around the towering temples of the Gods. The gods were the heart of the cities. Processions wound towards the temples, markets and courts were held in the squares near them, brothels and currency exchanges were operating. After the departure of the Gods, the cycle of the energy circulation of the cities was disrupted. Life stopped flowing into the temples, the cities breathed in and exploded, began to expand for themselves and for themselves only – in length, in height, more and more. Cities have grown into huge, terrifying and beautiful labyrinths of concrete, masonry, metal and glass. Wars, fires, earthquakes, and tsunamis periodically reduced cities to smoldering ruins, but once built, they were indestructible.

And now – the most important thing.

Organic matter and the detritus of artefacts charged with that matter’s creative energy feed the new cities or new versions of them that rise relentlessly above them, their roads and sidewalks, squares and bell towers. Cities grow on hope and greed. Their eyes are always open and their mouths are agape. The life of cities flows through mold spores and electrical wires, and its roots are tangled in all the previous incarnations of those cities, stretching back in time to the first foundations. Before the first altar, when people knew how to build altars. Cities have different time rules than mere mortals.

People, poor manikins hurrying through the streets, have no idea that the mute walls of their cities, stained with spots of ugly crumbling plaster, are full of life. The door frames and rough-laid paving stones recall all the previous generations of the city’s inhabitants, all recessions and holidays, changes of mayors and bloody uprisings.

What is remembered is never truly lost.

Cities are not good or bad. They are indifferent to the games of the oligarchs, they do not care about the efforts of public interest groups. New bike paths or public parks becoming someone’s private gardens – it’s all equally irrelevant to cities.

Cranes and scaffolding are the amphetamine for the city.

The city needs to grow and encompass as many lives as possible, whether happy or not. The amalgam of life, from the first inhabitants of the city to the last –  that is the soul of the city.

Cities are different. Some grow faster, they are sharp, future-oriented. Others are stagnating, and in their voices one can hear the voices of the inhabitants who turned to dust long ago more clearly than those of present day. Others are ghosts, empty blocks and sheets of torn tin flapping in the wind. Everything reeks of death and rot when you walk in them. 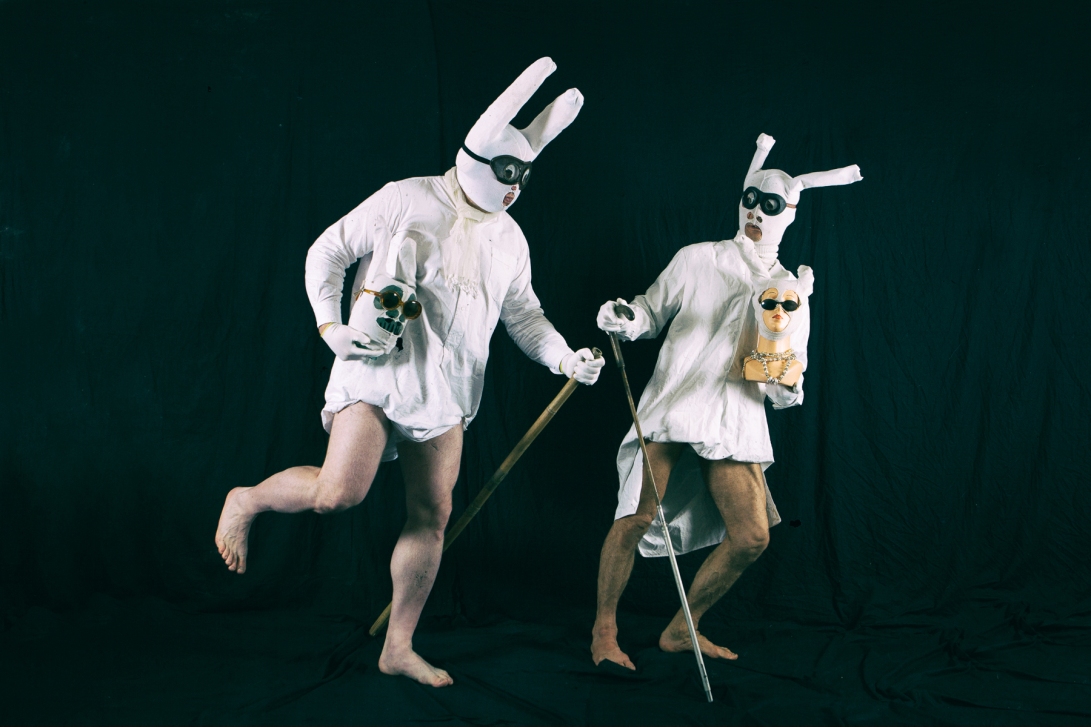 This story is about a city in the north.

That city is small, more extended in length than in width. Flatter than tall. Deceptively calm and cozy, with white beaches, flowers on windowsills, theatres and fountains. It is old, very old, with the scars of bastions and castle dungeons, with foundations and streets growing from the same places for hundreds of years. Eternal old men sit on the benches in the sunshine, the same moustachioed men sell the same useless medals in the market year after year, the same buns smell in the same bakery, the same river flows in the same bed, and at its bottom a thick layer of alluvium millimetre by millimetre covers a rusty bicycle and knight armour.

This city looks ordinary only at first glance. Its life time is full of cracks, and the generations of its inhabitants are so radically different that it is more correct to speak of a city(-ies) within a city. Its different realities sometimes collided even in the same time period. As if it were possessed, it spoke in different languages, prayed different prayers, and people of all creeds and colours were rubbing shoulders within it. The common denominator has always been sea breeze and money.

The average appearance of this city was and still is a cover for its swampy nature. It is true that its watery and viscous surface was eventually tamed by thick layers of soil brought from other countries and rubble levelled by fires, but those who carefully watch their steps can feel the swaying of the city – its buildings are swaying, its streets are swaying, it is all swaying slowly on the dark water surging from the depths.

Like other cities, this one is also obsessed with growth – it is bursting with flyovers and new buildings, but its streets are haunted by the ghosts. The voice of the past in this city is much stronger than that of today’s residents who have not yet got their feet wet. They are so polite and so eager to feel at home that they do not even realize that they are walking around wearing the faces of long-dead residents and seeing through the eyes of those said dead. Churches and offices, villas and barracks – vanished forms of the city overlap, duplicate with modern ones.

Memory is parasitic in this city.

No river is just a river. Therefore, the quiet and calm river crossing the northern city is not just any river. It is surrounded by individual yachts, a floating restaurant and museum, several water bikes and constantly hungry ducks.

The shadows of hooligan gulls glide through it.

The shadows of the clouds move through it.

The shadow of Charon’s boat glides through it.

Charon is long gone. There is a shadow. And the river remembers its ancient name.

The river remembers that it is the vein of a gigantic all-encompassing organism.

The city slowly sways on the dark waters.

In the city, the dead speak louder than the living.

The bells of his ruined churches ring in the city.

Its dead inhabitants walk in the city.

The past rises up in it, is reflected in the glass of new houses, fog wraps around the high booms of cranes and falls together with iron ore dust and rain on the crooked pavement and the roofs of the machines.

“Damned lindens” – curse drivers as they tirelessly scrape the sticky substance off their windshields.

The city breathes slowly with memories. It chokes on the past. Its living try to prove they are alive and celebrate bigger and louder celebrations, but they are all about the past. Stacks of strategic plans are growing in offices covered with cobwebs, every word is drawn into a form, graph, diagram. Members of meetings and commissions argue, negotiate, discuss, nervously shake the dust from their hair. There are more and more commemorative points and commemorative dates, plaques and monuments in the city. Fireworks. Fireworks again. Concerts of long-dead musicians with wax artists. Another meeting and another festival. But the trajectory of the city’s growth inexorably begins to resemble a spiral – back to its origins.

Fireworks and eternal stars are reflected in the river.

Fireworks and eternal stars are reflected in the windows of the city.

Then, one time, the space of this city, compacted by the past, opens up and God enters from somewhere else.

There are no more Gods. They withdrew. (This is a scientific fact).

God walks the streets of the city. (This is the reality of one city in the north).

He bathes in ruined ritual baths, carries a scythe-shaped sceptre, and flags flutter behind him.

He leans in and looks closely at people’s faces. In the city of the living carved from the dead, no one recognizes him.

God merges with the night. God runs in broad daylight.

God is laughing. God is playing with fire.

He looks at his reflection and sees that even in a city returning to its origins, the past does not become the present.

The dead are not the living.

Once the Gods have left, they cannot return.

The city dreams of the God who lived in it.

City people don’t dream of anything.

God disappears in the dark water of the river. 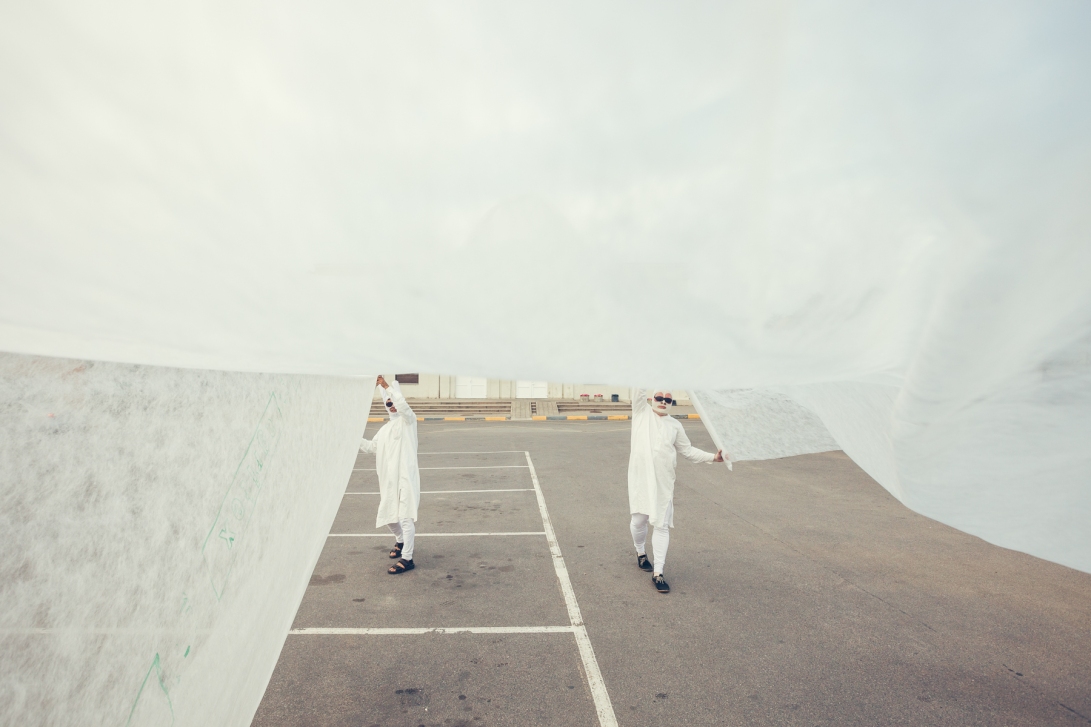 They were already here.

God of Music and guardian Goddess of the Home hearth. 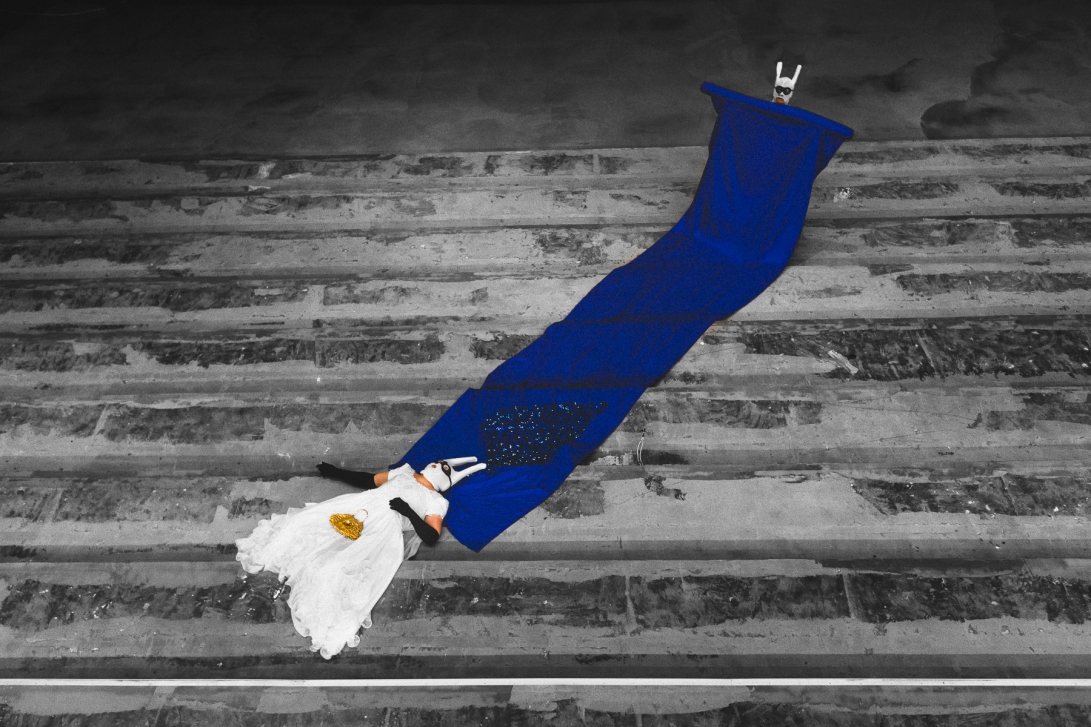 The sponsor of the project: Klaipėda City Municipality